See the Full Collection at AngelmanProject.com
“The Diagnosis and Treatment of Angelman syndrome” AKA “The Angelman Project.” The first in a series of multi-media databases on low incidence and related disorders and the model/prototype for the various projects within GeneticaLens was funded by Phase I and II grants from the National Institutes of Health, Institute of Child Health and Human Development, Louise Tiranoff Productions (LTP) began this project in 1995. The Angelman Syndrome Foundation provided additional sponsorship for the research in England. The project logged over 350 hours of film footage – 59 documentaries and 250 video clips, of 72 Angelman subjects, their families, and healthcare and educational specialists in both the US and England.
​
The original inspiration of the Angelman Project – When Dr. Tiranoff became godmother to a baby girl named Alexandra, she experienced first-hand what it means when a child has a developmental disorder that remains undiagnosed for far too long. At six months old, Alex was not developing speech or learning to walk, and she had serious seizures. It took five difficult years, and many doctors, to obtain a diagnosis of Angelman Syndrome and receive proper therapy. The delay to diagnosis and care can do harm – her parents almost lost Alex to seizures. 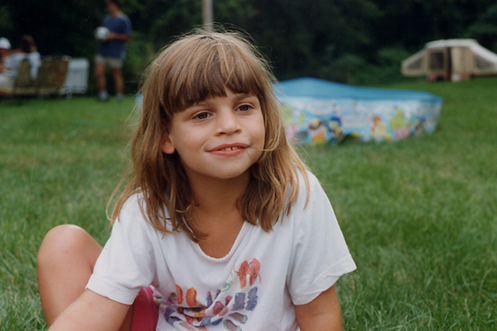 Alex
Part of the problem:  clinicians could look up rare diseases by name in a manual, but they only contained small pictures- and in disorders like AS, people with the disorder could look just like anyone else in a still picture – it was their gestures, their gait, and their behaviors (an excitable, happy disposition) that set them apart. The idea was born to produce documentary videos and short, expert-coded behavioral clips so that a parent or medical care provider without much experience in the disorders could actually SEE the appearance and behaviors that characterize them. Video seemed like a natural addition to the text information and criteria: video clips and documentaries linked to these texts to show what a disorder looks like, show variations in severity, show therapies in action, show the diagnostic process.
Powered by